Until April 30, 1994, Steve Welker’s life, as he tells it, was pretty much average. The third of four children born to a very loving — and consistently enterprising — couple, Lamar and Janice, the Welker kids — Steve, brother Jim and sisters Cheryl and Janice — had a normal upbringing, a good primary and secondary education, and they all looked forward to productive future years.

Steve chose Arizona State University as his college, and after appropriate study, coupled with extra-curricular activities in basketball and skiing, he was graduated with a degree in business with a specialization in insurance.

His career started in 1977, in property and casualty insurance, and he improved his business skills over the years, including certification as an Insurance Counselor (C.I.C.), until that fateful day . . . 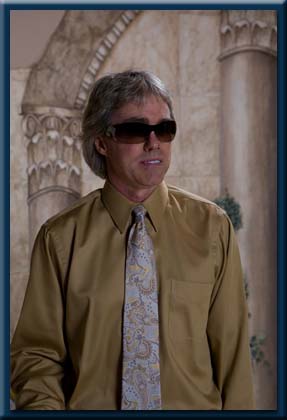 . . . . . . when he lost his sight in what can only be described as a “freaky” automobile accident. Then everything changed!

“Well, almost everything. As Steve’s recovery progressed, he decided to try continuing his insurance career. His employer was supportive and Steve’s career blossomed once again. Soon, prompted by his parents’ lifelong entrepreneurial examples, he found himself opening his own independent insurance agency, which he ran until 2004, selling it in order to give himself more time to devote to his new interest- motivational speaking, resiliency training and writing.

His challenge — blindness — gave him a special understanding that many people just like himself could overcome obstacles and live productive, rewarding lives. So, in the years since he lost his sight, Steve has become active at the Arizona Center for the Blind and Visually Impaired (ACBVI). He serves on the agency’s Board of Directors.

In 2014, Steve received his first guide dog, Orbit, from Guide Dogs of the Desert in Palm Springs, CA. Since that time, he has become an advocate for the school,

Steve and his wife, Dr. Kristina Welker, live in Chandler, AZ. They have two sons, Colton and Dylan. Dr. Kristina is a psychotherapist in private practice. www.drkristinawelker.com

* Motivational speaker and resiliency trainer. Steve has given hundreds of speeches to corporate clients of all sizes, associations, professional sports organizations, major universities and church groups.
* Author of the inspirational book ‘The World at My Fingertips, My personal story of triumph over tragedy. www.worldatmyfingertips.com
* Co- author, with his wife, of the self-help book, ‘Radical Resiliency- Steps for climbing to new heights regardless of life’s challenges’
* Chairman Emeritus for the Arizona Center for the Blind and Visually Impaired, Phoenix, Arizona (www.acbvi.org)
* Spokesman for Guide Dogs of the Desert www.gddca.org
* Arizona State University/ College of Business alumni
* Member of the Chandler Lions club

BACK to About Steve